Alkalize 55 from the Food Movement has been receiving rave reviews since it was originally released to the general public in 2011.  Formulated in conjunction with the work of the late Dr Michio Kushi and the Anew farm in Brazil, originally sold to natural health practitioners through the Medicatrix Naturae consortium, the original formula is once again available in health food stores everywhere! 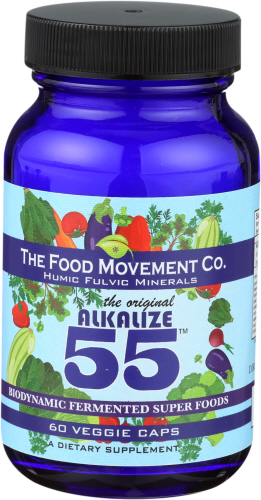 Dr Kushi’s purpose was to encapsulate the power of macrobiotics (a dietary philosophy based on balancing acid-alkaline states within the body) in an easily accessible dietary supplement.  Alkalize 55 brings you these important biodynamic foods alongside powerful living organic earth minerals.

Many folks have asked us – what are the 55 triple-fermented foods in this incredible and unique formula (which also contains humic fulvic minerals from the Earth)? Well here for the first time on the internet, I am publishing that list of foods is an easily searchable format and with information on each ingredient.

Anis – This ancient spice is noted for its subtle smell and taste. High levels of potassium and prebiotic fiber are concentrated during fermentation. Significant levels of phosphorous, calcium, and iron are also present. The seed contains a variety of polyphenol called phenylpropanoids with antiinflammatory properties. The major oil content is anethol which is a phytoestrogen. Traditional medicine uses it for colds and flu.

Apple – A macrobiotically favored, temperate climate fruit, the fermented apple retains its cholesterol-lowering sterols and prebiotic insoluble fiber. Moderate amounts of minerals such as calcium and potassium are concentrated during fermentation, aiding their absorbability. The triterpenoids in apple peel have anti-cancer effects in liver, breast, and colon cancers, and help protect against neurodegenerative diseases like Alzheimer’s.

Cassava – Tropically grown, and “yin” in macrobiotic terms, cassava has high prebiotic fiber content which is retained after fermentation. A very high carbohydrate level is complemented by modest protein content which features a wide range of amino acids. Vitamin C (immunity) is present in large amounts, as are potassium (cellular and nervous system), and folate (DNA, birth defects).

Cinnamon – A tree bark-derived seasoning and highly valued since antiquity, this tropical spice retains significant prebiotic fiber after fermentation. It has been shown to impressively reduce levels of blood glucose, triglycerides, LDL cholesterol, and total cholesterol. The spice is also known for positive effects on digestion, insulin activity, and blood pressure, and for antibacterial and antifungal properties.

Cloves – A spice used macrobiotically to increase “yang,” it retains a high prebiotic fiber content after fermentation. Also present at high levels are manganese, potassium, plant sterols, vitamin C, the B vitamin niacin, calcium, and iron. Significant quantities of vitamin A and magnesium are also found. The essential oils, mainly eugenol, and flavanols such as kaempferol, have important antibacterial and antiinflammatory properties.

Couve-Manteiga – Found in temperate regions, and closely related to collards, it is favored in macrobiotics. Following fermentation, couve-manteiga provides a favorable protein to carbohydrate ratio, and high amounts of vitamin A (immunity, vision). Calcium (bone health) content is highly bioavailable in this plant, as are modest levels of potassium (cellular and nervous systems) and magnesium (bone health).

Ginger – A traditional Chinese medicine and a spice introduced early to Western Europe, it contributes significant prebiotic fiber and its essential oils following fermentation. This rhizome is more effective than popular drug remedies in preventing motion sickness, due possibly to its high content of volatile oils and phenols. These constituents are also believed to contribute antiiflammatory effects.

Mango – From warmer climates, and macrobiotically “yin,”when fermented provide high levels of vitamin A due to high carotenoid content. This contributes to reduced fat cell formation and improved insulin sensitivity from highly bioavailable carotenoids. Mango’s moderate amounts of calcium, phosphorous, postassium and vitamin C, are retained after fermentation, and add to its nutritional benefits.

Plum – A temperate climate food, favored in macrobiotic diets, when fermented, plums retain their modest levels of phosporous, potassium, and vitamins C and A. Plums contribute useful amounts of choesterol-lowering sterols. The highly pigmented red skinned and red fleshed varieties contain healthful polyphenols which counter the destructive superoxide anion radical. They also help prevent oxidative damage to fats in brain cells and LDL cholesterol in the bloodstream, a main cause of heart disease.

Pumpkin – A macrobiotically-preferred vegetable, when fermented, pumpkin contributes high levels of vitamin A. This provides cataract protection and reduces risk of some cancers. A metabolite of A vitamin also discourages fat cell formation and reduces insulin resistance. Pumpkin has significant amounts of potassium (cellular and nervous system) and cholesterol-lowering sterols.

Soy Beans – A major source of protein in the macrobiotic diet, soy beans provide a wide range of amino acids which are preserved during fermentation. Also present in high amounts are calcium, and sterols. Significant levels of phosphorous (bones and cells), vitamin C (immune system), vitamin A (growth, skin, vision), and niacin (energy) are found, together with prebiotic fiber. In fermented form, soy isoflavones (having weak estrogen-like action) are absorbed by the body over twice as quickly as isoflavones in regular soy milk.

Spring Water -Over one hundred years ago, Japanese scientists discovered why some sake fermenters, using the same processes and amounts of ingredients, produced much more sake per batch. Why? Because the fermentation continued for a longer time, extracting more from the same ingredients. The main reason? The purity of the water. The more pure the water used in the fermentation, the more sake that was produced. The bonus was that the purest water produced the best flavor. And, even better, the purer the water, the less anti-nutrients that were produced.

The water used in Alkalize 55 is the purest on the planet. This, in part, explains why it is the slowest, longest fermentation anywhere, and why it produces no known anti-nutrients. Plus, it is full of flavor.

Sweet Potato – Grown in temperate areas, and preferred in macrobiotics, this vegetable retains its extremely high vitamin A content when fermented. This carotenoid (vitamin A) reduces risk of cataract and some cancers, and its metabolites discourage fat cell formation while improving insulin sensitivity. Also present in it are significant levels of potassium, zinc, copper, manganese, vitamin C, folic acid, and sterols.

Tomato – Found in temperate climates, which is favored in the macrobiotic diet, when fermented, tomatoes retain a high lycopene level which acts as a powerful antioxidant and offers protection against prostate cancer. Tomatoes also have significant cholesterol-reducing sterol, and cateract/cancer reducing caroteinoid/vitamin A content. This in addition to significant potassium level (cellular and nervous system).

Watermelon – A temperate region fruit, strongly preferred in macrobiotics, watermellon is distinguished by a very high vitamin A level after fermentation. This confers protection from cataract and some cancers while reducing fat cell formation and insulin resistance. The red pigment of the flesh is shown to be a powerful antioxidant. Moderate levels of sterols add to its cholesterol-lowering effects.

West Indian Lemon Grass – Noted for a high concentration of citral oil, which imparts a lemon flavor and aroma. Citral also has powerful antimicrobial properties which are concentrated after fermentation. A folk remedy for stomach and intestinal problems, lemon grass is also used as an antidepressant.

Yerba Mate – A traditional mildly stimulating drink from subtropical South America, yerba mate contains low levels of alkaloids similar to coffee and cocoa (caffeine, theophylene, theobromine), together with modest amounts of potassium, manganese, and magnesium. In traditional form, the drink promotes focus and alertness in a calming manner without jitteryness. A stimulating effect on the heart muscle has been noted.

Zedoary – An aromatic bitter spice grown in the tropics it is rarely found in the West. After fermentation, it imparts its bile flow influence. The major terpenoid, sesquiterpine, has an anti-inflammatory and antioxidant effect, complementing significant tannin (antiviral, antibacterial, anti-parasitic, anticancer) and flavonoid (antioxidants) polyphenol content.